“The clearest example [of the Zionist mind-set] is the flag of the State. Anyone who looks at the flag can discern, if you take out the star for a moment, a talit [tallit, a traditional man’s prayer shawl]. White fabric with two stripes of techelet [tekhelet, an ancient blue dye that was lost, to be refound only in the End of Days]. (All talitot [tallitot] have stripes [except for Sephardic Jews, so in every respect the flag sends an exclusive, Ashkenazi-only message!], either white or black.) To them the techelet (tekhelet) symbolized redemption of the People of Israel. That was what they wanted. ‘Here we’ve come, to the Land!’ ‘Exile is over!’ ‘We’ve come!’ ‘We’ve come back to our roots.’ ‘We’re reunited!’ ‘We’re here!’ That was the techelet. Another point that is also very important, it tells a message to the Jew: ‘If, until now, you were required to wear your talit [sic] on you, it is no longer necessary. You can just put it on the flag and feel good as a Jew. Your talit [sic]—on the flag! Everyone sees it. That’s sufficient. No need to fulfill the commandments in practice. Just connect with their national spiritual content, and that’s sufficient’” (Rabbi Rafael Rafaelov, Scholar of Zionist literature). 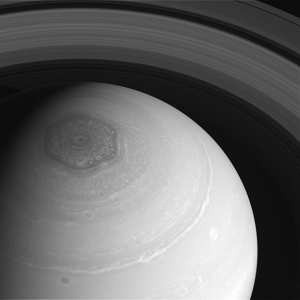 Astronomy. Saturn’s arctic hexagon. Photo taken by Cassini-Huygens, an unmanned spacecraft sent to the planet Saturn. Curiously, the Hexagon actually came to Eastern Europe as a Saturnian talisman (see below). 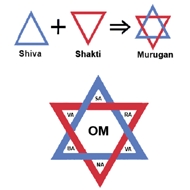 Khazar religion. Hexagram with inner circle and outer circle. This seems to be some kind of seal or coin of the realm. Such engravings as this “were found on circular Khazar relics and bronze mirrors from Sarkel and Khazarian grave fields in Upper Saltov. However, rather than having been made by [orthodox] Jews, these appear to be Shamanistic Sun Discs” (The Jews of Khazaria by Kevin Alan Brook).

Khazaria. Hexagram outline with inner quadrants. The Khazars converted to “Judaism” in a bid for neutrality, but funny things happened along the way, as this heritage-celebrating site unabashedly shows: http://khazaria.com/

Flag of the Karamanid Dynasty. 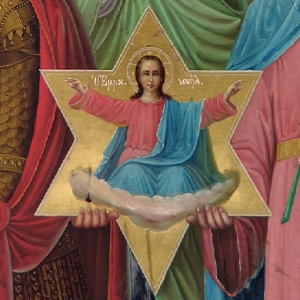 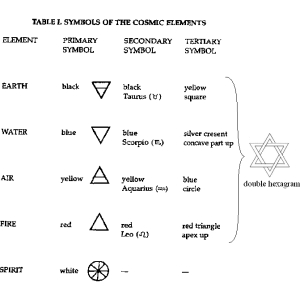 Alchemy. Double Hexagram (not necessarily interwoven) is made by combining all the material elements. “In Rosicrucian and Hermetic Magic, the seven Traditional Planets correspond with the angles and the center of the Hexagram as follows, in the same patterns as they appear on the Sephiroth and on the The Tree of Life. Saturn, although formally attributed to the Sephira of Binah, within this frame work nonetheless occupies the position of Daath [i.e. Da’At]” (Wikipedia, cf. The Ritual Magic Manual by David Griffin, p. 31). “In alchemy, the two triangles represent the reconciliation of the opposites of fire and water [△+▽=✡]” (Wikipedia). Perhaps the hexagram also symbolizes The Fifth Element (i.e. Quintessence: spirit /ether).

Bavaria. Interwoven hexagram with “beer stein”. Common tavern anchor in southern Germany. “It is symbol for the tapping of beer and sign of the brewer’s guild. In German this is called Bierstern (Beer Star) or Brauerstern (Brewer’s Star)” (Wikipedia). 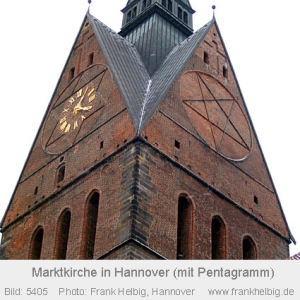 German cathedral architecture. Hexagram with outer circle. (See Saturnian Talisman above.) This is the Marktkirche in Hannover, Germany. “In heraldry and vexillology [and later printing], a hexagram is a fairly common charge employed, though it is rarely called by this name. In Germanic regions it is known simply as a star. In English and French heraldry, however, the hexagram is known as a mullet of six points, where mullet is a French term for ‘a spur rowel [i.e. the pointy part of the spur] which is shown with five pointed arms by default unless otherwise specified.’”

Masonry, Theosophy, Raël[2]. Composite interlocking hexagram symbols. Masons almost always defer to Muslims, and this seems to be no exception. They are the only two groups that insist that hexagram is the Star of David, contrary to the historical record and the traditions of observant Jews.

Hexagram with large outer circle. The coin the Nazis struck after their successful journey and six-month stay in 1933 with Baron von Mildenstein, who became head of the Jewish Desk of the SS Security Service (SD) in 1935 as a guest of the Kibbutzim and Histadrut. 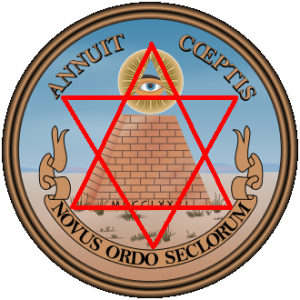 United States of America. Implied hexagram with outer circle: The Reverse of the Great Seal and US$ Bill. (It spells M-A-S-O-N using the first and last letter of each line, with the central letter of the bottom line.) 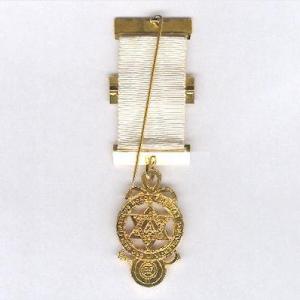 Masonry. Royal Arch-Freemason’s Medallion. “The interlacing triangles or deltas symbolize the union of the two principles or forces, the active and passive, male and female, pervading the universe…The two triangles, one white and the other black, interlacing, typify the mingling of apparent opposites in nature, darkness and light, error and truth, ignorance and wisdom, evil and good, throughout human life” (Encyclopedia of Freemasonry by Albert G. Mackey). Please note that Masons are the most abysmal historians you’re likely to meet and that there is nothing to indicate the hexagram was found within the structures of King Solomon’s temple, but quite the contrary. In fact, Masons and only Masons would think of dating the form in the Semitic world to before the 3rd century! 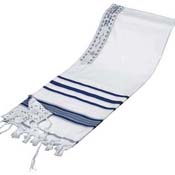 Flag of the State of Israel. Note the talit of the Ashkenazim and the Sephardim, respectively: 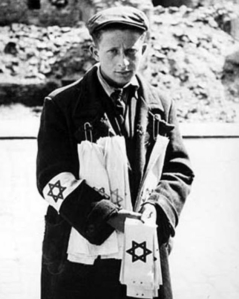 Having instituted concentration camps and signed the Ha’Avara Transfer Agreement (1933) to shanghai Jews to the sands of Palestine, and having stripped all Jews of their citizenship (1939), Adolf Hitler’s Nazi administration obliged Jews to brand themselves with yellow-filled hexagram badges with faux-Hebrew letters that spelled Jew in German; they also had them register/surrender their weapons (1938), to go to ghettos (1939), to go to concentration camps. Throughout modernity, the hexagram represents Jewish Zoning and Ghettoization, beginning with the Pale of Settlement (Russian: Черта́ осе́длости) of the Ashkenazi of Eastern Europe, continuing under Hitler, and presently under the Zionists, who try to oblige all Jews to abandon their nations of residence—and their religion—to live in the socialist, Khazar-terrorist-run State of Israel. In fact, as an alternative to the yellow stellated badge, in 23 November Hans Frank (Hitler’s half-Jewish lawyer-Generalgouverneur who admitted in a dying note that Hitler had been quarter-Jewish) ordered all Jewish Poles above the age of 11 years in German-occupied Poland to wear white armbands with a blue Magen David on. See how closely the Jewish Nazis and the Zionists were collaborating?

Flag of the British Mandate of Palestine. 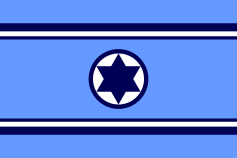 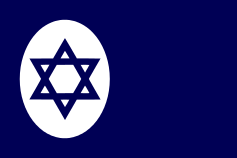 Facebook. Covert tilted hexagram with large outer circle: Facebook’s once-secret Insignia that appears to be inscribed on the blue lining inside the inner circle’s hoodies. “Making the world open and connected.” Won’t it be great when the Deep State gets a Facebook account and post “nude pics” of all their operations and plans?

Western interpretations of Yoga. Hexagram with outer circle and twelve lotus pedals: The Heart Chakra, Anahata (a.k.a. Anahata-puri, or Padma-sundara).

[1] It’s like the Hindus never catch a break: first the Zionists steal their Hexagram, then the Nazis steal their Swastika, and then they all go on this worldwide propaganda rampage where they pretend to be totally separate, even opposed operations!

[2] Many Raëlians are vying to rehabilitate, you guessed it, the Swastika. (Note how their Swastika points right, just like the Nazi one.) “The symbol initially used by the Raëlian movement was the source of considerable controversy linked to a proposal to build the Raëlian embassy in Israel since it resembled a hexagram with the image of a Swastika embedded in its center” (Wikipedia). Raël’s “Elohim” voices then took aim at Lebanon (elohimembassy.org).

4 thoughts on “The great Star of David scam”