In my last post I dealt with the heresy that you can’t amount to what Jesus did, which blatantly contradicts some of Jesus’s most frequent maxims. In this post I’m going to survey how we got our view of Jesus in a (for me) down-to-earth historical survey.

Most Christians now insist that Jesus was human and divine, a God-man, the God-man, the Son and Heir of God the Father–even though in the gospels and epistles there’s ample empowerment for the hearer to follow Jesus and become himself truly Another Jesus (summarized in my last blog post). Now in all of this both humanity and divinity are supposedly understood in a Hebreocentric (as opposed to Hellenized) sense.

Note the many Moses-Satan parallels

But I can remember reading somewhere that most modern Jews (90% are technically Ashkenazim not Hebrews) have a prodigious index of schizophrenia. What if we asked ourselves why the Graeco-Roman world really took to this arch-Jewish figure whom they call Jesus and Christ? Well, for starters, Judaism is a unique holdover from Egyptian ways of life. That is why I’m going to call Egypt the X-factor of Europa. 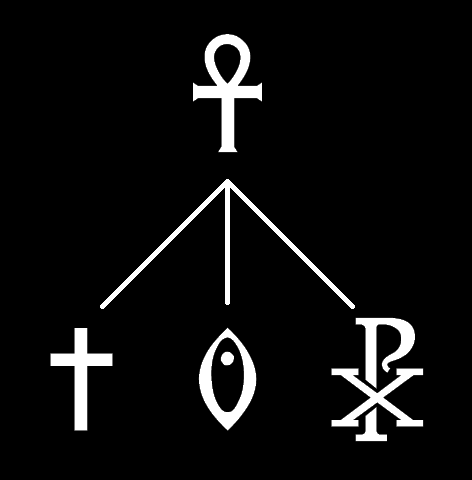 The Pharaohate of Kemet fell in 30 BC(E) when a woman was Pharaoh, Cleopatra VII [1] Philopator [2]. Graeco-Roman civilization has often revered its Egyptian roots and by association Temple Judaism, as we see in Freemasonry. [3] Alexander the Great wasn’t too great to seek his destined arch-divinity in spiritually fertile Egypt [4].

And thus, Egypt is the root of the Graeco-Roman world, remembered for its stable society, a father of nations, though the stronger sons tended to differ more widely than the weaker sons. But even the strong sons turn instinctively back to Egypt in times of empire and cultural decline.

The Jews uniquely, due to their frequent “exiles” (and/or perhaps causing them) kept clinging to Egyptian ways more tightly in many ways than most did, with the latter availing themselves of prosperity (and a more verdant natural environment) to forge their own identity.

The phenomenon of God-men or Übermenschen, therefore, was the Jews’ frequent visitor, a phenomenon which again we now stigmatize as schizophrenic, which is why (unlike say Korea) we don’t get too many Übermensch types rising to a level of popularity where they could threaten the power structure’s monopoly on the workman’s mind again.

And on those rare occasions when the “Jesus neurology” does crop up, our bureaucratic religious “fathers” can simply play their Christological exceptionalism card and tell the young rebel confidently that the Savior already came and what they’ve got going on must certainly be pride, demons or indeed schizophrenia–depending on the subculture and the times.

As a matter of fact, the Greek term barbarian seems to have begun as an antisemitic slur, with bar (“of”) being among the most frequently occurring words in the Hebrew tongue. The creed on which Christendom settled was that God is one (as in Judaism), but also three (as in Hinduism), but Jesus Christ is definitely just one, full stop.

This helped me understand how Europa could revere Jesus (and his early Jewish entourage) while fearing and hating all the rest of the Jews, and this is why Jews don’t need Jesus despite Europa’s insistence: the Jewish people are lousy with Jesus types–they get at least one messiah every century! Our kings went to great lengths to keep us apart from that people set apart, since of course the latter’s culture (with its Kabbalah center) could handily dilute and dispel those doctrines that underpin ultimately the authority of those other foreigners of the house of Caesar, the crowned heads of Europa. Of course today, in lieu of the Divine Right of Kings, as I’ve argued elsewhere, we have the Chosen People doctrine designed to silence the common objector.

________
[1] Speaking of fatal 7ths, Ferdinand VII was King of Spain during the French purchase of “New Spain” [Mexico-ish] and the Mexican War of Independence.
[2] Meaning that she was devoted to her father.
[3] Note: Saint Peter’s Basilica features what are known as Solomonic columns.
[4] “Alexander advanced on Egypt in later 332 BC, where he was regarded as a liberator. He was pronounced son of the deity Amun at the Oracle of Siwa Oasis in the Libyan desert. Henceforth, Alexander often referred to Zeus-Ammon as his true father, and after his death, currency depicted him adorned with the horns of a ram as a symbol of his divinity” (Wikipedia citing Ring, Bosworth et al., and Dahmen).