‘And I say unto you, Make to yourselves friends of the mammon of unrighteousness; that, when ye fail, they may receive you into everlasting habitations’ (Luke 16:9).

Simony is a term that refers to the sale of things that are deemed sacred. It is one of the most sacrosanct Church traditions, indeed a founding principle, that a priest or other minister must not require money for a sacrament(al), an amulet or any product or service thought to possess mystical power, and the breach of said tradition is one of the best-known catalysts of the Protestant Reformation. So an act of simony is associated with a considerable degree of evil (even more than its sound-alike sodomy unless you’re a Baptist), namely that of the money changers outside Solomon’s temple who alone incurred the violent wrath of Jesus (if the Canonical Gospels are taken as truthful and comprehensive). If you picture someone setting up a tollbooth on the road to heaven, you’ll have some idea of what simony is. It inhibits people from entering heaven, and the person doing it doesn’t enter heaven anyway but has chosen a worldly position instead. These are all themes of Jesus’s rants in the Canonical Gospels of the Christian Scriptures. (Muhammad is said to have been possessed of a similar rage in Mecca, whence Islam [and toothbrushes]!)

As for Simon Magus, as he’s called, he stands apart from the Jerusalem temple establishment in that he is simply never known to have committed simony by that definition. What he did, even by Christendom’s accounts, was the reverse, and it was something Jesus (in his least popular parable) enjoins all to do.

In chapter 8 of Acts Simon Magus is portrayed as someone particularly interested in manifestations (signs), which really fits the common idea of the magus or magician. (He is perhaps the historical model for the Wizard of Oz, much as Babylon is the model for Atlantis.) It seems that the Gift of the Holy Spirit gives people the ability to command the spirit-world but that the ability to bestow said gift was a secret kept among Jesus’s closest apostles, Simon Peter and John. Simon Magus, adept and man of means that he was, apparently thought it couldn’t hurt to offer to buy the trade secret off of Simon Peter and John. But Simon Magus, in his aristocratic ways, probably came on a little strong, Simon Peter and John really thought highly of themselves, and Simon Magus apologized and managed to diffuse the drama manifesting pomp, which more than likely was not the kind of manifestation Simon the Mage had been hoping for.

Now had Simon Peter and John offered to sell their recipe to Simon Magus, the pair would have been guilty of what (by now I think you know) we mistakenly call ‘simony’. As for Simon Magus, he had merely attempted to make to himself friends of the mammon of unrighteousness; that, when he should fail, they might receive him into everlasting habitations, exactly as Jesus had counseled his Apostles, Simon Peter and John included. Can it be that Simon Peter and John perceived that power had gone to their heads and they were beginning to stray from the pure wisdom of Jesus with all their admittedly characteristic Hebrew preoccupation with signs and with being viewed as the only ones worthy to wield them?

Either way, the real tragedy is that Simon Magus is seen even not as a symbol of simony so much as gnosticism. But I’m going to just say that simony is the real evil, simony and the sin against the spirit that is the gravest blasphemy and modernism. Like its co-founders, the Church has taken its eye off the ball by preferring system to spirit and allowed modernism to worm its way in.

We need to get back to Simon’s self-effacing way. Perhaps that at least is Francis’s gift (whether sincere or not).

‘Notwithstanding, lest we should offend them, go thou to the sea, and cast an hook, and take up the fish that first cometh up; and when thou hast opened his mouth, thou shalt find a piece of money: that take, and give unto them for me and thee’ (Matthew 17:27). 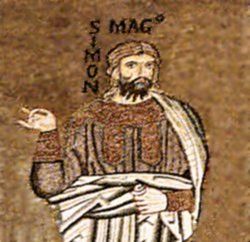