I feel like I’m writing a horror story, á la Stephen King or H.P. Lovecraft, only what follows is not made-up.

I personally have become convinced that “democratically” elected representatives are cautiously tolerated and openly courted by sales reps of the Judeo-Masonic establishment in order to keep the little man from revolting against the real masters of the modern world, the Banksters. An added layer of protection is the most abused word in the English language: antisemite. Abused because it is meant politically, not racially, and defames those who would resist the Zionist program, which many Banksters espouse [**], or any policies thereof.

The best example of Bankster-sponsored puppet theater, shockingly, was Adolf Hitler himself, a renowned half-wit who only outlined for Mein Kampf, the theoretical passages of which were probably penned by Julius Streicher [†].

One-quarter Ashkenazi “Jewish”, Adolf was an agent of such AshkeNazi™ (“Zionist”) Banksters as Max Warburg of New York City, who financed the Hitler Campaign. (See photo above.)

Adolf was selected as Germany’s chancellor, its guardian (Führer), and its “hero”, nay its “savior” (according to a piece some say Hitler wrote under a pen name) in order that through him Warburg might control Aryan opposition and redirect the impending and justified uprising against the breathtaking corruption and degeneracy of the interbellum Weimar Republic, channeling all that vigilantistic fury into something that proved most advantageous to the Zionist conspiracy, a point on which Adolf Hitler seems weirdly to converge with that other socialist Joseph Stalin.

In the end, Adolf Hitler the man proved to be a character out of Mein Kampf, and not the true revolutionary hero either but just another middleman for the Judeocracy, a phony partisan who was a loyal only to his élite caste the Ashkenazim (or perhaps just to their endless supply of money and other chicanery), who unbiblically insist that we call them “Jews”. In all candor, they’re probably the least moral or rational group on the planet, even worse than their allies the Freemasons.

Banksters like the Warburgs and the Rothschilds have financed, and scored handsome returns from, all sides of modern warfare. Even Bankster support for AshkeNazism™ (“Zionism”), or on certain features thereof, has wavered at times. But they consistently stand with Ashkenazi “Jewish” exceptionalism and privilege, which is blatantly upheld in so-called “Israel’s” legal code today.

Their key to staying in power has been keeping the false flag attacks coming hot and heavy and raising up convincing opponents whose memory will serve to scare the goyim into doing your bidding.

“It would be an excellent idea to call in respectable, accredited anti-Semites as liquidators of property. To the people they would vouch for the fact that we do not wish to bring about the impoverishment of the countries that we leave. At first they must not be given large fees for this; otherwise we shall spoil our instruments and make them despicable as ‘stooges of the Jews.’ Later their fees will increase, and in the end we shall have only Gentile officials in the countries from which we have emigrated. The anti-Semites will become our most dependable friends, the anti-Semitic countries our allies”
(The Complete Diaries of Theodor Herzl. Vol. 1, edited by Raphael Patai, translated by Harry Zohn, page 83-84).

I’d like to think the truth will set you free and not just make you depressed because the world is being paintballed from a high perch. Please comment on which it does for you. 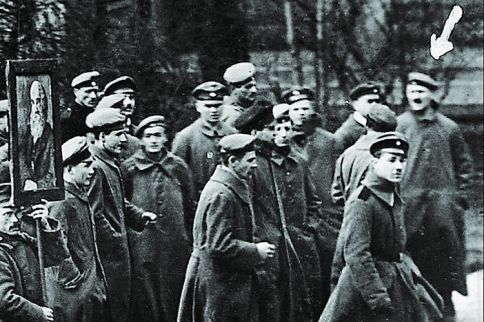 ________
[*] Hitler was elected 30 January 1933; the הסכם העברה/Heskem Haavara/Transfer Agreement between Nazi Germany and Zionist German-Jews was signed 25 August of the same year, followed by eight years of a policy of emigration (incontrovertibly the opposite of extermination) toward those Jews living in German and other European land. “after three months of talks by the Zionist Federation of Germany, the Anglo-Palestine Bank (under the directive of the Jewish Agency) and the economic authorities of Nazi Germany. It was a major factor in making possible the migration of approximately 60,000 German Jews to Palestine in 1933–1939” (Wikipedia, citing the Jewish Virtual Library). The agreement facilitated the transfer of Jewish capital from Germany to Palestine in exchange for open trade. This at a time when we’re told “Jewish organizations outside Germany” (though this wouldn’t seem to include Warburg and his stooges) were boycotting Hitler’s Germany. It is worth noting that these moneys were redeemed in a Palestinian currency known as the Palestine Pound.

[**] Evidence for near-unanimous Bankster support of AshkeNazism™ (often misspelled Jewish Political Zionism) can be found in the fact that both the Allied (Communist) and the Axis (Fascist) forces in World War II were pro-Zionist. Concerning the Allies, when Stalin saw that the Ashkenazi™ “Jewish” “State” of “Israel” refused to embrace his brand of Communism, he set up the Jewish Austonomous Oblast on 7 May 1934. The “JAO” is still administered as Russia’s easternmost appendix.
[†] Streicher was named by Captain Karl Mayr, together with Rudolf Hess and Karl Haushofer, as one whom Hitler plagiarized. Mayr, who himself had coached Hitler’s writing process, called the Führer an ignoramus. (Knowing what we do about autism, this characterization of Adolf may have been an oversimplification by an angered Prussian taskmaster.)
[‡] “Intelligence agents” is a nice word for spies, assassins and mind control sickos.

“Academia’s” narrative is that White and masculine specimens (to include the fathers and male role models of all their students) are defective, deficient and inferior.

In terms of race, today’s avant-garde “scholars” emphasize “Whitey’s” lack of melanin, hoping enough of their systemist harem of pet-UFOs (unidentified flunking objects) will infer that any “lack” must be bad (though their thought process mysteriously never progresses beyond this point).

In terms of gender, these pseudo-Hippie bank reps pretend the male digestive system (“farts”) or his ability to hyperfocus say on technological advances somehow proves that he is “less” than women.

Unbeknownst perhaps even to these trolls, they are angling to replace White power with Ashke-Nazi hegemony and patriarchy with a more direct and comprehensive tyranny.

There is a real war and genocide against Whites (meaning real Europeans, Jews [the 1%] exempted) against Whites and against viable men in particular.

Being himself autistic and hyper-male in some respects (though certainly hypo-male in other respects), and as someone who furthermore once thought he was interested in theology, pedagogy, and other establishment “scholarship”, this blogger hasn’t gotten through one of his 36 years without once taking this crap full blast from Femme-Nazis and Kwanzaa-Nazis, who have invaded the rather blatantly ephemeral, unnecessary and frequently abused fields of “Education”, “Social Work” and “Religion”.